A report on ’s troubled news media released by the Public Policy Forum recently – titled The Shattered Mirror – extends the reflective analogy used by Senator Keith Davey’s study of mass media in 1970. “In the decades since Senator Davey declared the media mirror ‘uncertain,’ it has cracked and now appears shattered,” states the think tank headed by former journalist Edward Greenspon, which was hired  contracted by Industry Canada and the Heritage committee studying Media and Local Communities ministry. Yet the PPF report is more like a funhouse mirror that grossly distorts reality in at least one key media industry. Not only does it buy into the Big Lie that has surrounded newspapers for years – that they are losing money and thus dying – the report seemingly does its best to promote that myth. It repeats the canard that industry dominant Postmedia Network is bleeding red ink by mentioning that the company lost $352 million in its fiscal year ended last August 31. That’s only if you deduct a $367 million “impairment” charge that reflects the reduced value of Postmedia’s business on paper, plus a raft of other extraordinary expenses such as the $42 million cost of severing staff. Otherwise, on a cash-in/cash-out basis, Postmedia recorded operating earnings of $82 million on revenues of $877 million for a profit margin of 9.3 percent, which sure beats buying bonds. What really dragged it down, however, was the $72 million in interest payments the company had to make on debt bizarrely held mostly by its hedge fund owners. That piece of financial engineering more than anything is necessitating Postmedia’s constant staff cuts and thus diminishing Canadian journalism. 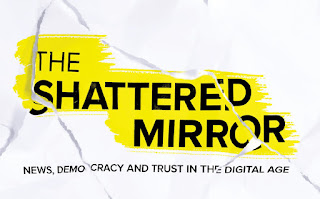 The PPF report is silent on the problem of hedge funds owning ’s largest newspaper company, which was inexplicably allowed by the erstwhile Harper government despite a supposed 25-percent limit on foreign ownership. Postmedia then bought 175 of the 178 newspapers owned by Sun Media, Canada’s second-largest newspaper company. That gave it both dailies in , , and , but the Competition Bureau let the purchase stand because it somehow concluded those newspapers didn’t compete anyway. Postmedia then merged the newsrooms of its duopoly dailies in all four cities despite promising not to, effectively eliminating daily newspaper competition there. The PPF report gives the Competition Bureau a pass, noting only that it was “caught by surprise” by Postmedia’s broken promises. The company’s dominance might not be apparent in , where its Sun and National Post have competition from the Star and Globe & Mail. In the three westernmost provinces, however, it has a stranglehold with 75 percent of paid daily circulation and eight of the nine largest dailies. We wouldn’t be in this situation if enforced our foreign ownership and competition laws.

The report further perpetuates the newspaper death myth by pointing out that six Canadian dailies were closed, merged or changed publication frequency in 2016. Can you name them? I had to look it up. Most would guess the Guelph Mercury, which was shuttered a year ago to some consternation. The other five were small town dailies in B.C. and , only one of which was actually closed. Four of them were owned by the B.C. chains Black Press and Glacier Media, which have been carving up the province’s community press between themselves unhindered for years. The chains have been playing a real-life game of Monopoly since 2010, buying, selling and even trading newspapers back and forth and then often closing them to reduce competition. Black and Glacier have closed 19 of the newspapers they have exchanged, including non-dailies. More than half of the 15 newspapers the chains traded in one 2014 deal were subsequently shuttered. Of the seven paid circulation dailies that have died in this decade through closure or merger (not lived on with a change in publication frequency), six were killed by Black or Glacier. As a result, Black Press (no connection to Conrad Black) now owns all but one of the newspapers on , which is the size and population of . Has the Competition Bureau even noticed?

But my favorite part of the report is where the PPF predicts that newspaper sales will fall to only two per 100 households by 2025, down from 18 in 2015 and 49 in 1995. How it came up with that projection, other than by using a lead weight, is beyond me. So ardently does the PPF promote the newspaper death myth that the heading for this section screams “THE END MAY BE IN SIGHT.” That may accord with the popular misconception, and with what the late American media critic Ben Bagdikian called the “myth of newspaper poverty,” which publishers on both sides of the border have promoted for decades to their great regulatory benefit. It doesn’t accord with financial facts, however, which I detail in my 2014 book Greatly Exaggerated: The Myth of theDeath of Newspapers. Their revenues have undeniably fallen off a cliff in recent years, but my research shows that no publicly-traded newspaper company in the or suffered an annual loss on an operating basis between 2006 and 2013. That period included their steepest revenue declines ever during the Great Recession of 2008-09. Newspapers will survive as long as they remain profitable, which they show an uncanny ability to do. That’s because they are remarkably adaptable organizations and are able to make themselves smaller in short order, unfortunately by mostly throwing people overboard. This has weakened their journalism and endangered our democracy. We need digital media to pick up the slack, but they find it hard to compete for advertising revenue with Google and Facebook.

The PPF report makes some interesting suggestions for measures to breathe life into ’s flagging news media. Changes to the country’s antiquated laws on charitable giving are badly needed to allow non-profit news media outlets to accept tax-deductible donations, as they can in the and other countries. The report’s suggestion of taxing Canadian companies that advertise with the American digital giants, then using the proceeds to subsidize Canadian news media, may be realistic depending on how it is done. Let’s hope that Greenspon and his researchers are better informed in those areas than they are on newspaper economics.
Posted by Marc Edge at 8:57 AM